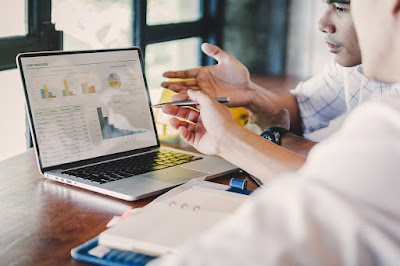 Since the energy industry is quite large, many organizations may struggle to find the best way to operate. They will often have to figure out how to build automation systems, acquire building certifications and get building equipment that is energy efficient. One of the ways in which energy companies can better run their organizations is to use energy management software. Software will enable them to complete several tasks more efficiently as well as more easily manage their operations daily. Energy management software also allows businesses to make building structures more sustainable as well as save money. There are four major components of energy & utilities software. These include real-time energy data analytics, energy data submetering, team collaboration tools and centralizing energy management for your portfolio.

With real-time data analytics, businesses in the energy industry can display all of the energy data on the cloud. This allows a business to collect information from meters on a building. With this data, an energy company can change the metrics and time frames, make comparisons of buildings and correlate the consumption of energy with building occupancy and its external temperature.

The software’s energy data submetering allows a business to find out where all of the energy is being used. Once energy meters are installed onto the building, the software allows companies to look at and analyze information for different parts of the building. This software helps organizations break down the meter information by categories such as space, use, meter, and source.

With energy & utilities software, organizations in the energy industry can take advantage of team collaboration tools. This software will improve the collaboration with any team in an organization. They will all have the ability to customize reports, share notes, receive alerts and provide relevant data to property managers, building owners and engineers who need this data to complete their given tasks each day.

Using this software also allows organizations to centralize energy management by seeing all of the buildings in one location. This can be used to compare multiple buildings or display how they are currently performing. The software is customizable in which it can allow an organization to integrate with other software which is used to better manage a building.

Whenever a company in the energy industry uses this software, they can save a considerable amount of money. They are in a position to improve their operations through monitoring energy consumption and using a more simple system of tracking the use of energy. By using this software, businesses will be able to increase their profits and maintain the financial health of their organization.

One of the ways how energy software saves money for businesses is by facilitating more efficient management. The software can consolidate all of the systems in a building with one application. As a result, businesses can more easily control all of the heating, cooling, lighting and security systems. They can also control elevators and fire safety systems as well. With one application, an organization will have an easier time managing its energy sources and reduce costs.

Using the software also allows businesses to reduce the overall consumption of energy. They can reduce their energy costs by as much as 30% with this particular type of software. The lower energy consumption will result in lower expenditures for energy use. Through monitoring and analysis of information such as building temperatures, businesses can use data through reports, graphs, and charts to track where all of the energy is being used. This then enables them to find energy sources where they are consuming too much unnecessary energy and then reduce its overall use.

The software also helps businesses use a smaller carbon footprint. They can use the software so that they can more easily reduce the amount of energy consumption they use. This results in increased sustainability which allows a business to avoid paying additional costs for things such as energy certifications and compliance fees.

With this software, companies in the energy industry will be able to save money by spending less on marketing costs. By using the software, they can inform customers that they use environmentally friendly energy sources. As a result, businesses will have a more favorable reputation among customers and get them more easily. They will not have to spend more funds providing information about additional benefits. With less money required for marketing, these energy companies will be able to maximize revenue and profits with the use of the energy management software.

Companies in the energy industry are now looking to use certain software to keep up with the latest trends in the industry. To keep up with the latest trends, they now look to use software that provides them with several benefits. Today, energy companies can use the software to reduce expenditures, provide better service to their customers and also run their daily operations more easily by using utility management systems and energy management software.

The terrifying consequences of living near a nuclear power plant: and guide to protecting yourself 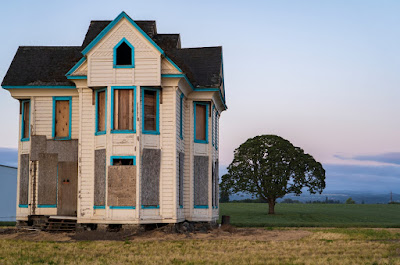 The standard of living in modern cities is increasingly high. And, with this high standards are consequent financial responsibilities. For many, this has strengthened their resolve to live far away from the City centre. Apart from the serenity and lower cost of living, the outskirts are characterized by lower crime rates, lesser congestion and more closely knit communities. What’s not to like?
Spurred on by these ‘advantages’, more and more houses are now being sited in close proximity to oil and gas drilling locations, radiological health centres and even nuclear power plants. For some, settling around these places is not entirely of their design. Regardless, is living close to a nuclear power plant the best course of action?
In the 1950’s, there was huge enthusiasm for nuclear energy. As opposed to the other methods of generating electricity, it was cleaner- producing no direct atmospheric emissions (under normal operating conditions). And it had far better yields. One pound of uranium-235 can produce over two million times more electricity as one pound of coal or oil. However, radiation fears and the subsequent fallout from the Chernobyl and Fukushima disasters tempered this enthusiasm. And understandably so.
Vast improvements have since been made in nuclear technology. Between the plethora of barriers and sophisticated safety systems in operation, regulatory oversight from the US Nuclear Regulatory Commission and the increased levels of operator training, it is highly unlikely that a disaster would occur. However, no system is fail proof. No system is perfect. And, for a variety of reasons: natural disasters near the power plant, human error and plant mismanagement, amongst others, an accident may occur.
In the unlikely event of an accident, living close to a nuclear power plant puts you at enormous risk. An uncontrolled nuclear reaction could result in widespread contamination of air and water. Besides, direct radiation from the damaged reactor is a possibility in this scenario. Depending on the distance from your house to the reactor and the level of radiation, the effects may not be devastating.
More ominously however, is the prospect of ingesting a radioactive isotope. The most common isotopes released during a nuclear accident are Iodine-131 and Caesium-137. Accumulation of the former may cause thyroid cancer and the latter can interact with DNA; causing a malfunction and eventually lead to cancer.
Studies have shown that there is in fact no direct correlation between cancer and living close to a nuclear facility. However, the associated dangers in operating a nuclear power plant and the likelihood of human error mean it’s hardly the best of ideas.
The Three Mile Island accident in Pennsylvania, 1979 remains the most serious nuclear disaster in US history and a survey carried out in 2010 showed that there have been at least 55 other accidents involving nuclear reactors in the United States.
All the same, there are more than 120 million Americans living within 50 miles of a reactor, and if you are among these ‘brave’ Americans, there are several ways you can protect yourself, in the unfortunate event of an uncontrolled reaction.
The Environmental Protection Agency recommends understanding- and applying the principles of time, distance and shielding.
Limiting the exposure time gives you a greater chance of escaping unscathed, as it reduces the dose from the radiation source.
Moreover, the further away you are from the radiation, the safer you’d be. If your house is in close proximity to the reactor, this may not be practical. Nonetheless, maintaining adequate barriers between yourself and the radiation source could be effective. Barriers may include lead, or concrete. Herein, is the design of your house important.
Furthermore the EPA suggests staying indoors, taking a shower, eating sealed foods and drinking bottled water. And of course, staying tuned for further instructions.
The protective measures and ‘pros’ notwithstanding, living close to a nuclear power plant is not ideal. And, in a normal world, wouldn’t be an option. But, it is. And, more and more people are living right next to active reactors. Technology, eh?
Precious Marho is a freelance copywriter. He covers the safety, oil and gas and green energy industries.
By Syndicated Maps at 9/19/2019 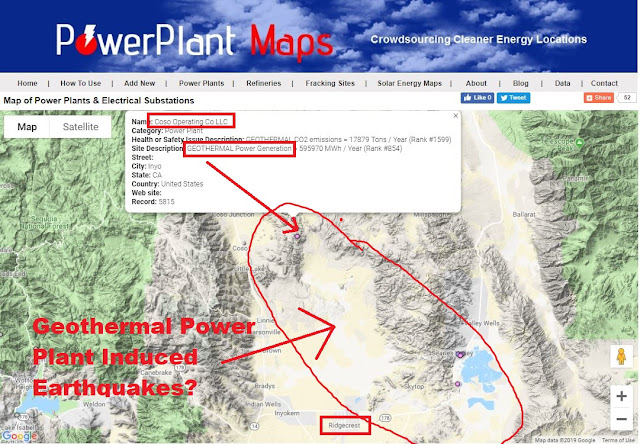 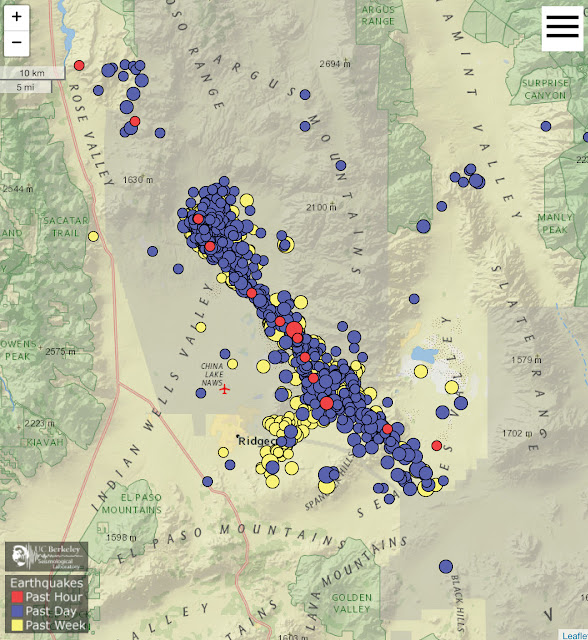 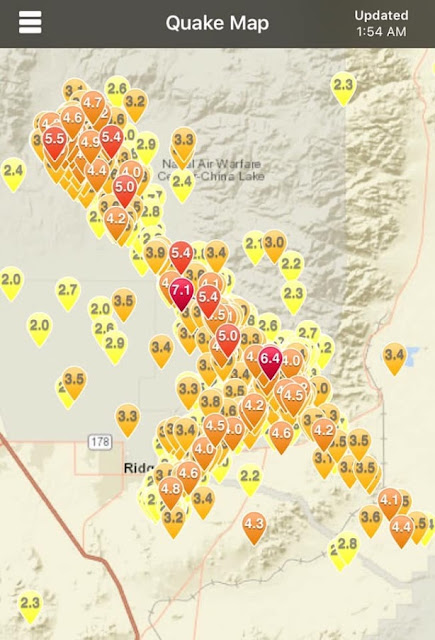 Map of Earthquakes near Ridgecrest, California 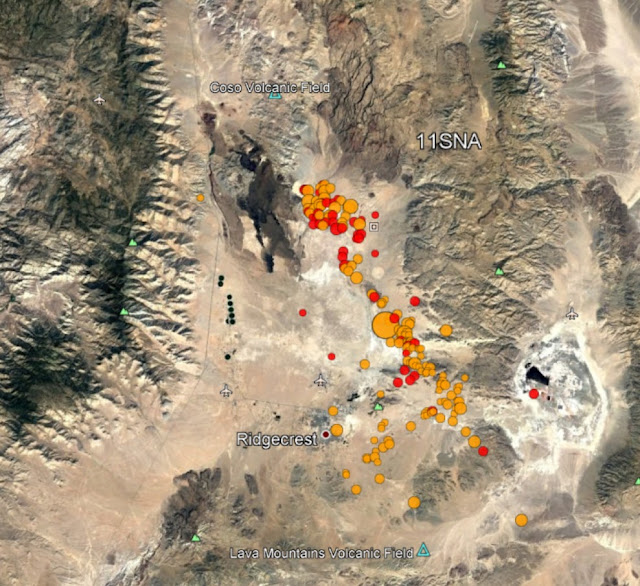 Does everyone remember the earthquakes near the Hawaii geothermal power plant on the Big Island last year and then the volcanic eruption that followed?   This cluster of Ridgecrest earthquakes look very similar to what occurred in Hawaii near a geothermal power plant which were induced by injection wells (aka "fracking").  This area of Ridgecrest is a volcanic area where geothermal injection wells also exist.  See detailed images of what a geothermal field and injection well map below. Read this article evidence grows that Hawaii volcanic eruption caused by Puna Geothermal Power Plant.

The Coso volcanic field, located in the northern part of the Mojave Desert, is one of the most dangerous volcanic areas in California.  The swarm of earthquakes sit between 2 acient vocanic fields.  The Coso Volcanic Fields and the Lava Mountain Fields.  According toe USGS it is estimated that the Coso volcano erupted 40,000 years ago.

The "injection well" concept (aka fracking) is to extract heat by creating a subsurface fracture system to which water can be added through injection wells. Creating an enhanced, or engineered, geothermal system requires improving the natural permeability of rock. Rocks are permeable due to minute fractures and pore spaces between mineral grains. Injected water is heated by contact with the rock and returns to the surface through production wells, as in naturally occurring hydrothermal systems. The US Department of Energy calls this "Enhanced Geothermal System".  EGS are reservoirs created to improve the economics of resources without adequate water and/or permeability.

The injection well drilling technique is also using in oil and gas and this is commonly known as "fracking".  See DrillingMaps.com and do a search on the map for fracking where a number of minor earthquakes have been caused by this phenomenon.

The Coso Operating Company geothermal facility, nine geothermal plants on U.S. Navy-owned land abutting China Lake, produces about 145 net megawatts (MW) of power to Southern California Edison. To put that in perspective, a single megawatt has enough electricity to provide power to roughly 1,000 homes. The pipes enter each power station, weaving into steam turbines. The turbines are coupled to generators, and turn at about 3,600 rpm, producing 13,800 volts of electricity. Geothermal reservoir source has been consistent at 600˚F (almost 3 times boiling point). The plants were constructed from 1987 to 1989, and currently use about 105 production wells to capture underground steam that steam turbines then transform into electricity. The first of the facility’s four power plants eventually went online in May of 1987. Each power plant now produces almost equal amounts of power.

Earthquake swarms are common in the Coso area, often producing hundreds of tremors over periods of time as short as a few days. This kind of brisk and robust seismic activity is common in volcanic areas, such as Long Valley Caldera located near Mammoth Lakes, and Yellowstone Caldera at Yellowstone. 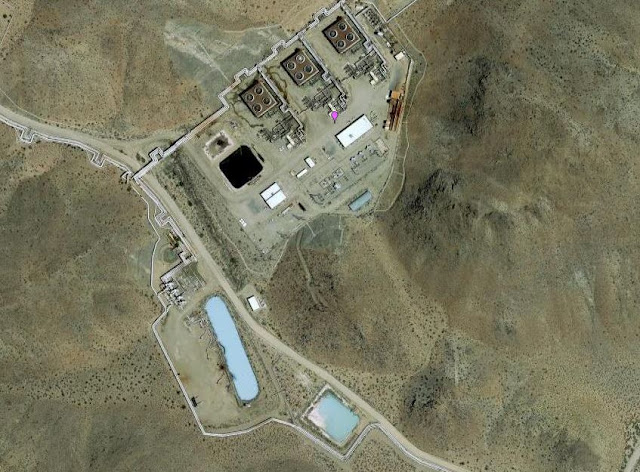 Cos Energy Geothermal Wells
By Syndicated Maps at 7/06/2019