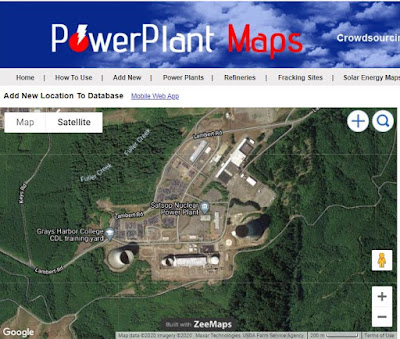 The Washington Public Power Supply System initiated the largest construction project for nuclear power plants in U.S. history in the 1970s: reactors 1, 2, and 4 at Hanford, and reactors 3 and 5 at Satsop, west of Olympia. The project was scrapped as the budget swelled to $25 billion and public sentiment turned against nuclear power (particularly after Three-Mile Island).

In the end, only one plant was completed: Washington Nuclear Power Unit 2 (now known as the Columbia Generating Station), located on the Hanford Reserve. Construction was well underway at Satsop, and plant number 3 was approximately 76 percent complete, with the reactor built. Cooling towers were left in place, 480 feet tall-which had never generated a breath of steam-while all power generation machinery was removed. Since then, the site has grown into a special business/technology park. It is now known as Energy Northwest, the Washington Public Power Supply Grid.

The nuclear power plant was 76% complete when the project was canceled; dismantling the structure would have cost millions, so it was left standing.

The unfinished Satsop Nuclear Power Plant in Elma, Washington, built in the 1970s at an eye-watering cost of $6bn (as part of WPPSS, the largest nuclear plant construction project in U.S. history), and abandoned in 1983, when money ran outhttps://t.co/Tb90Md4gY5
© Jordan Stead pic.twitter.com/Pm8puNGsk4